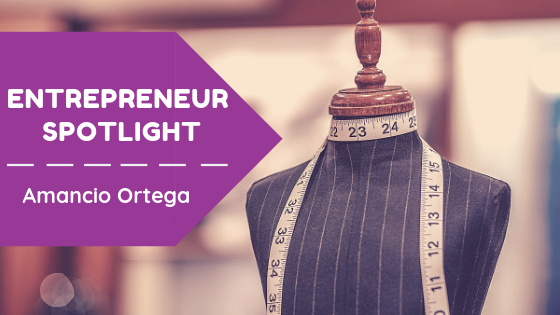 This month’s entrepreneur spotlight focuses on one of the richest men in Europe! As of the date I wrote this blog post, his real-time net worth was listed at $65.5 billion. Ortega is considered a revolutionary in the field of fast-fashion and has investments in more than 6 cities across 3 countries.

Amancio Ortega is a Spanish-born entrepreneur. He got his first taste of the fashion industry around the age of 14 when he gained employment at Gala, a local shirtmaker. It was here that Ortega learned how to handcraft clothing. After some time, he moved on to manage a retail store meant specifically for wealthy gentlemen.

The billionaire has a reputation for being extremely private about his personal life, so not much else is known about his early years. In fact, he’s so private that he had only given three journalist interviews as of 1986, and the first photo of him wasn’t published until 1999; an impressive feat considering he began his ascent into entrepreneur stardom nearly two decades earlier.

Amancio founded his first company in 1963. It was called Confecciones Goa and it specialized in the sale of bathrobes.

Amancio Ortega and his late wife Rosalia Mera opened their first Zara location in 1975. By 2009, the company was a part of a larger group known as Inditex. The parent company is home to several well-known brands including Massimo Dutti, Pull and Bear, and Bershka. Ortega owned just under 60% of Inditex —the Spanish entrepreneur founded the holding company in 1985. It went public in 2009.

A (then) unique feature of Ortega’s Zara stores was the concept of fast-fashion. For those unfamiliar with the concept, fast-fashion occurs when clothing manufacturers “sample” looks from prominent runways and reproduce them using less expensive materials and more efficient manufacturing methods and supply chains. It was a relatively new idea in the 1970s, but it took hold quickly because it provided consumers with a quick, affordable way to obtain looks that were or would be trending in the fashion industry.

In 2011, Amancio Ortega retired from Inditex while maintaining his majority stake. Within the year he began acquiring various commercial buildings around the world. His real estate holdings, which he purchased with the help of dividends from his entrepreneurial career, helped bolster his already significant wealth. As of February 2019, Forbes reported that Ortega tends to earn approximately $400 million per year in dividends.

Find out more about Amancio Ortega and other Entrepreneurs in Think Like by Aaron Sansoni!

The Benefits of Reading Non-Fiction

The benefits of reading are discussed on a regular basis in nearly every classroom around the world. Educators boast of benefits like vocabulary expansion and improve comprehension skills regularly. What they fail to mention is that what you read actually matters. Researchers have posited that students and individuals should read nonfiction or informational based texts just as often if not more than fictional stories. Here’s why.

You have to focus when you read. That’s true of any genre if you’re aiming for comprehension, but it’s particularly true for non-fiction. Real life events rarely unfold in a predictable manner. They are often complicated by multiple contributing factors that you must keep track of if you’re going to truly understand all the implications. Reading some form of non-fiction on a daily basis could improve your ability to focus.

Readers that devour non-fiction books can develop a rather impressive general knowledge base. Non-fiction is full of facts, which means that non-fiction readers are acquiring bits and pieces of information about real-world people and events on a regular basis.  While retaining 100% of what you read is highly unlikely, odds are that you’ll hang on to the information that you find most valuable or interesting thereby improving your knowledge bank a little at a time.

Fiction is fantastic if you want to escape reality. If you want to learn how to overcome reality, however, then your best bet is non-fiction. When you read factual information you are being exposed to obstacles that actually exist in the real world. You see how they develop and, in many cases, are made to understand why they pose challenges. You absorb information about the tactics others have used to overcome these obstacles, and whether or not those tactics worked. It’s essentially a way for you to analyze potential scenarios before encountering them yourself.

The opposite of reading about real-world obstacles is reading about real-world successes. Undoubtedly, readers will come across stories where the main character accomplishes his or her goals with some remarkable feat against all odds. If you are reading fiction, this scenario may be interpreted as fantasy. If you are reading non-fiction, however, it can be interpreted as a inspiration, motivation, or even a goal!

Reading non-fiction books can do wonders for your psyche, especially if you are an aspiring entrepreneur or salesperson. The next time you are shopping for a book to read on the beach or on a plane, do your brain a favor…choose non-fiction.

Recent Posts
Recent Comments
Archives
Categories
Meta
Login to Aaron Sansoni
Reset Password
Enter the username or e-mail you used in your profile. A password reset link will be sent to you by email.